A Pluto by Any Other Name 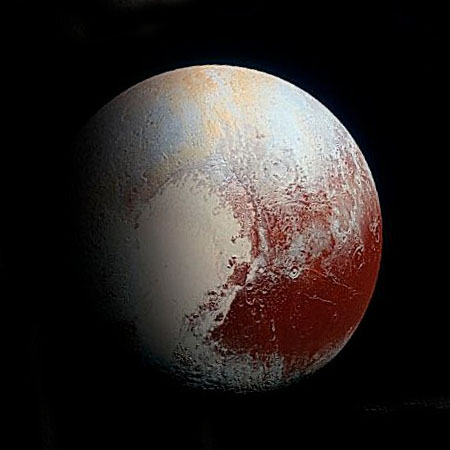 Remember Pluto? I mean the Pluto before all the controversy about its status within the solar system. It was comfortably nestled within the grand planets and most amateur astronomers accepted its “9th planet” status. Then, something happened. Objects beyond Pluto were discovered, hinted as being new planets by some and disqualified from that special honor by others. From there, the controversy grew until Pluto’s status itself was questioned. This debate reached a head in August 2005 when an object named 2003-UB313 (actually discovered in October 2003) was claimed as being our 10th planet simply because its diameter was found to be larger than Pluto’s. The news media jumped on it from all angles, calling on anyone with an opinion on the matter. It was generally accepted by the media that it was indeed our 10th planet, without any input from the International Astronomical Union (IAU), the institution that is the genuine policy-makers on astronomical matters, and has been, since 1919 when it was founded.

Back on February 18, 1930, when the very young Clyde Tombaugh first spotted Pluto on photographic plates taken of a small portion of the constellation Gemini, the IAU was in a better position to classify Pluto a planet because;

1) Kuiper Belt objects had not been discovered yet;

3) the news media was extremely limited in how quickly it disseminated information to a vast audience. As a result, the IAU could take its time making its decision about Pluto’s status, and did not have to worry about instant feedback (positive or negative) about its decisions (or indecisions).

In modern times, the news media, with lightning-fast speed relatively speaking, effectively side-stepped the IAU in deeming 2003-UB313 a planet and eagerly reported opinions on both sides regarding Pluto’s status. Everyone loves a fight. The very sad fact was (and still is) that the solution could never be reached if millions of people (astronomers or not) were given the responsibility of finally reaching a decision on the matter. Although initially the IAU was effectively bypassed with respect to 2003-UB313’s unofficial status, it could not be bypassed with respect to the official say on the matter, since the IAU is still recognized as the authority to classify solar system objects as planets, etc.

This is not a “remember when?” article, but actually a plea for people to slow down for a few minutes and actually ponder just what is going on with this debate. Some say the debate is pointless, mainly wasting valuable time that we could be using exploring the solar system instead of trying to reclassify its members. Others say it is of dire importance, simply because they believe it will utterly redefine the solar system as we know it. I agree on both counts, depending on the reasons. I agree that it is not worth us squabbling over, since the IAU is the only institution that has the authority to make final decisions on the matter. I also agree that it is of dire importance, since if we believe too much in a media that knows precious little about astronomy, let alone how to verify facts and claims it receives on the subject, then we deserve to have Earth removed from the “planet” list as well. Sometimes having a governing body with a set of rules and regulations is a good thing.

The discoverers of the various Kuiper Belt objects are not Snow White innocent either, mainly because we cannot rule out ego in this equation. Wherever humans are involved, ego ultimately follows. It’s in our nature. If any of us were to discover something new in the heavens, would we not try to grandstand in some way by saying it is the find of the century? If you or I discovered some celestial body that was larger than Pluto, would we not say that it was automatically a planet? Would we not want fanfare? Should there be some limit to this behavior? Should the IAU have some final say before the media is even alerted? These are the questions that should be raised with respect to scientific morals and ethics, but this is a very complicated issue (see: politics).

And so, the 7 wise men (and ladies) debated over the definition of “planet” to appease the “Gods of Public Opinion”. What was initially proposed was, in my view, a scientific triumph, but a public-relations disaster (it happens). The “scientific triumph” produced 3 new planets (Ceres, Charon and 2003-UB313), raising the total number to 12, with the possibility of many more in the future. It also produced a term called “Pluton” which sounded more like a sub-atomic particle than a solar system object. This redefinition was deemed unacceptable by some of the astronomy community (and others), and therefore was repackaged for general consumption. The final solution was, dare I say, a compromise in which Pluto was demoted to “Dwarf Planet”, Charon remained a moon and Ceres (with 2003-UB313) was promoted to “Dwarf Planet” status as well. In short, our solar system is now comprised of 8 “Classical Planets”, 3 “Dwarf Planets”, and a mess of “Small Solar System Bodies”, all to be confirmed at a later date. What a fun job that will be, but it is progress nonetheless!

Of course, Pluto will not care what it’s called, hence the title of this article. We could rename it “Tombaughland” and it would still be orbiting the Sun every 248 years or so. Its orbit would not change, nor would its physical characteristics. Therefore, personifying Pluto will do no good, although it might swell sentimentalism.

Another unfortunate consequence of our “instant information” society is that the IAU’s decision might not even stick. For example, at my last physical, my doctor weighed me in pounds, not kilograms. Isn’t Canada metric now? Officially yes, unofficially, not quite. Some amateur astronomers might choose to ignore the new rules and continue calling Pluto a planet out of habit, which is fine, since there are no Astronomy Secret Police lurking around (that we know of).

Pluto used to be the “challenging planet”; the one that was the tough one to collect to get all nine in the set. Now, it’s much easier. You can see all eight planets using good binoculars, although Neptune would still be somewhat of a challenge, but not as much as Pluto! Pluto takes, as a minimum, a telescope and a very dark sky.

This decision also means that NASA has retroactively visited all the planets of our solar system. Just like amateur astronomers with telescopes, NASA would have “collected all nine” with the New Horizons probe. Now that the equation has changed, the probe will be investigating a “Dwarf Planet“. This does not sound as glamorous, does it? Maybe “Pluto: gateway to the Kuiper Belt” would be sexier? However, this is still better than the alternative. If Pluto had remained a planet, it would have been very likely that 2003-UB313 would also have been promoted to planet status, making NASA’s mission to “collect the whole set” that much tougher, not to mention the poor amateur astronomer with his/her 8-inch telescope!

At the risk of sounding American, this is what Thomas Jefferson alluded to when he wrote the U.S. Declaration of Independence. As an accomplished scientist, Mr. Jefferson understood that progress requires change in the face of changing circumstances. That is what exactly happened when 2003-UB313 was discovered. It challenged the very notion of Pluto’s status to the point that Pluto’s planet status was removed. Was this right? The debate will rage on for decades, but whatever the final final final (etc.) decision, we (or our descendants) can look back on the debate and say, “We were not afraid to change our very basic understanding of our solar system”. That is positive progress in itself, and therefore not irrelevant.

Pluto should have remained a planet, since it was traditionally known as such. Ceres and 2003-UB313 rightfully deserve their “Dwarf Planet” status, as do other objects that fit the category. I know it would be a contradiction to keep Pluto a planet and deem 2003-UB313 a “Dwarf Planet”, but there are always exceptions to the rule (see: time zones). Pluto should have been one of these exceptions, at least in memory of its discoverer; an amateur astronomer who by an incredibly lucky break was hired to find the 9th planet of the solar system and did just that. If he had lived that long, what would he have said on August 24th, 2006?

Tonight, when the sun sets and the twilight fades to black, go outside and look southwest. There’s mighty Jupiter, gleaming brightly. It looks so nearby, yet Jupiter is 830 million km away. Light from the sun takes 43 minutes to reach the giant planet, and for Earth’s fastest spaceship, New Horizons, it’s a trip of 13 months.

Not far to the left of Jupiter is Pluto. Oh, you won’t be able to see it. Tiny Pluto is almost 5 billion km away. Sunlight takes more than 4 hours to get there, and New Horizons 9 years. From Pluto, the sun is merely the brightest star in a cold, jet-black sky.

A smidgen to the right of Pluto, among the stars of the constellation Ophiuchus, is Voyager 1. Launched from Florida 29 years ago, the spacecraft is a staggering 15 billion km away. It has traveled beyond all the known planets, beyond the warmth of the sun, almost beyond the edge of the solar system itself.