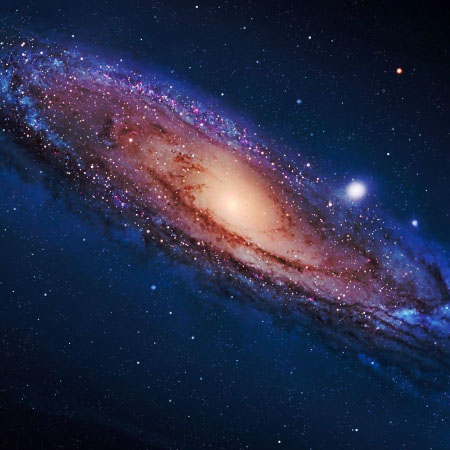 People worry about asteroids. Being hit by a space rock can really ruin your day. But that’s nothing. How would you like to be hit by a whole galaxy?

It could happen. Astronomers have long known that the Andromeda Galaxy is on a collision course with the Milky Way. In about 3 billion years, the two great star systems will crash together. Earth will be in the middle of the biggest wreck in our part of the Universe.

Astronomer John Hibbard isn’t worried. “Galaxy collisions aren’t so bad,” he says. A typical spiral galaxy contains a hundred billion stars, yet when two such behemoths run into each other “very few stars collide. The stars are like pinpricks with lots of space between them. The chance of a direct hit, star vs. star, is very low.”

Hibbard knows because he studies colliding galaxies, particularly a nearby pair called the Antennae. “The two galaxies of the Antennae system are about the same size and type as Andromeda and the Milky Way.” He believes that the Antennae are giving us a preview of what’s going to happen to our own galaxy.

The Antennae get their name from two vast streamers of stars that resemble the feelers on top of an insect’s head. These streamers, called “tidal tails,” are created by gravitational forces—one galaxy pulling stars from the other. The tails appear to be scenes of incredible violence.

But looks can be deceiving: “Actually, the tails are quiet places,” says Hibbard. “They’re the peaceful suburbs of the Antennae.” He came to this conclusion using data from GALEX, an ultraviolet space telescope launched by NASA in 2003.

The true violence of colliding galaxies is star formation. While individual stars rarely collide, vast interstellar clouds of gas do smash together. These clouds collapse. Gravity pulls the infalling gas into denser knots until, finally, new stars are born. Young stars are difficult to be around. They emit intensely unpleasant radiation and tend to “go supernova.”

GALEX can pinpoint hot young stars by the UV radiation they emit and, in combination with other data, measure the rate of star birth. “Surprisingly,” Hibbard says, “star formation rates are low in the tidal tails, several times lower than what we experience here in the Milky Way.” The merging cores of the Antennae, on the other hand, are sizzling with new stars, ready to explode.

A New View of the Andromeda Galaxy

You can find it with your unaided eye. At first glance, it looks like a very dim, fuzzy comet, wider than the full moon. Upon closer inspection through a backyard telescope-wow! It’s a beautiful spiral galaxy. At a distance of “only” 2 million light-years, Andromeda is the nearest big galaxy to the Milky Way, and astronomers know it better than any other. The swirling shape of Andromeda is utterly familiar.

Andromeda is not a spiral but a ring. To the human eye (or to an ordinary visible-light telescope), Andromeda remains its usual self: a vast whirlpool of stars, all ages and all sizes. Andromeda is defined by its youngest, hottest stars. They are concentrated in the galaxy’s core and scattered around a vast ring some 150,000 light years in diameter. It’s utterly unfamiliar.

Looking at familiar galaxies with a new wavelength, UV, allows us to get a better understanding of the processes affecting their evolution.

Beyond Andromeda lies a whole universe of galaxies-spirals, ellipticals and irregulars, giants and dwarfs, each with its own surprising patterns of star formation.  Only a few, such as Andromeda, have been analyzed in complete detail.