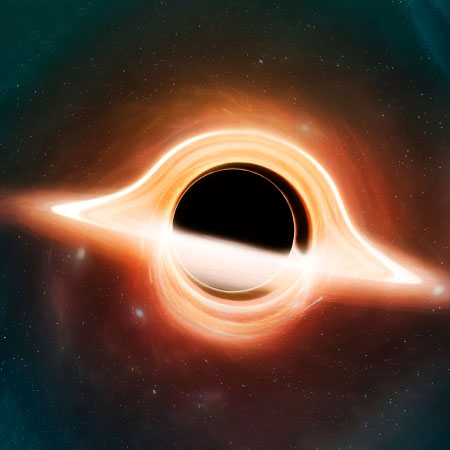 Astronomers have finally confirmed something they had long suspected: there is a super-massive black hole in the center of our Milky Way galaxy. The evidence? A star near the galactic center orbits something unseen at a top speed of 5000 km/s. Only a black hole 2 million times more massive than our Sun could cause the star to move so fast. (See the Oct. 17, 2002, issue of Nature for more information.) Illustration Courtesy NASA/JPL Artist’s Conception of the Accretion Disk Surrounding a Black Hole Still, a key mystery remains.

Where did the black hole come from? For that matter, where do any super-massive black holes come from? There is mounting evidence that such “monsters” lurk in the middles of most galaxies, yet their origin is unknown. Do they start out as tiny black holes that grow slowly, attracting material piecemeal from passing stars and clouds? Or are they born big, their mass increasing in large gulps when their host galaxy collides with another galaxy? A new space telescope called LISA (short for “Laser Interferometer Space Antenna”) aims to find out. Designed by scientists at NASA and the European Space Agency, LISA doesn’t detect ordinary forms of electromagnetic radiation such as light or radio waves. It senses ripples in the fabric of space-time itself gravitational waves.

Albert Einstein first realized in 1916 that gravitational waves might exist. His equations of general relativity, which describe gravity, had solutions that reminded him of ripples on a pond. These “gravity ripples” travel at the speed of light and, ironically, do not interact much with matter. As a result, they can cross the cosmos quickly and intact.

Unfortunately, these waves are hard to measure. If a gravitational wave traveled from the black hole at the center of our galaxy and passed through your body, it would stretch and compress you by an amount far less than the width of an atom. LISA, however, will be able to detect such tiny compressions.

LISA consists of three spacecraft flying in formation a giant triangle 5 million km on each side. One of the spacecraft will shoot laser beams at the other two. Those two will echo the laser signal right back. By comparing the echoes to the original signal, onboard instruments can sense changes in the size of the triangle as small as 0.0000000002 meters (20 picometers).