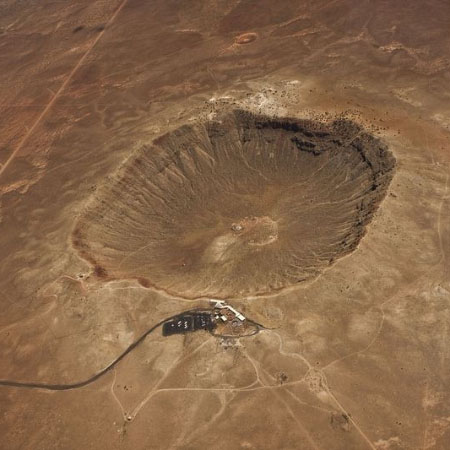 What would be the sequence of events following the collision of a large binary asteroid with the earth? The mass of air displaced by a meteorite of thousands or millions of tons will be insufficient to produce appreciable retardation during its passage through the atmosphere and it will reach the surface of the earth with little loss of velocity. Impact velocity could range anywhere from 12 kilometres/second to 70 kilometres/second.

The high instantaneous pressure generated on impact is comparable to that at the centre of the earth and will be shared by the meteorite and by the volume of rock into which it impacts. The impact will have two principal effects;

A pressure of this magnitude will give rise to a shock wave which will vaporize a certain proportion of the material involved, melt a somewhat larger proportion and shatter large volumes of rock extending to distances of the order of 50 times the diameter of the impacting meteorite, and;

As the meteorite comes to rest, the mixture of highly compressed rock and meteorite fragments will receive an upward and outward acceleration mainly from the decompression of shocked material, comparable to a powerful explosive.

The resultant crater will vary from simple to peak-ring (or multi-ringed as seen on the moon’s surface!). The resulting raised rims and the relatively shallow depressions of the impact craters will be particularly vulnerable to the Earth’s geological processes of erosion and deposition. This makes certain structures very difficult to determine whether or not they are impact related.

Fortunately, the work pioneered by the Canadian Dominion Observatory in the 1950’s and 1960’s, described by Dr. M. R. Dence and Dr. B. Robertson at our Ottawa RASC monthly meetings, allows us to unambiguously identify that certain structures on earth are in fact impact related.  An excellent example of the result of a collision between the earth and a binary asteroid is at the Clearwater Lakes double impact craters. These structures are confirmed as impact related. The 32 km. diameter Clearwater Lake West shows a prominent ring of islands with a diameter of about 10 km. The islands constitute a central uplifted area and are covered with units of breccias and impact melt. The central peak of the 21 km. diameter Clearwater Lake East is submerged. This twin crater phenomenon is very rarely recognized on Earth. But, coincidentally, there is another twin impact site relatively nearby that features two confirmed impact structures. They are in the Canadian Shield at Sudbury, Ontario, but these impact events are totally unrelated. The impact that resulted in the Sudbury Crater happened almost two billion years before the Wanapitei Crater impact. The Sudbury Structure is interpreted to represent the tectonized and deeply eroded remnant of a multi-ring or peak-ring impact with an estimated diameter of 250 km. Wanapitei is classified as a simple crater because of its estimated diameter of 3 km to 8 km with no evidence of a central uplift in the submerged crater. So, if you are worried about being bonked on the head by a large meteorite, move to Sudbury.

That area has had its quota of large impacts in the recent eons! The Manicouagan impact structure in central-northern Quebec is one of the largest impact craters still preserved on the surface of the Earth. The annular moat, prominent in space images, fills a ring where impact-brecciated rock was once eroded away by glaciation. The 100 km. diameter of the original crater is approximately three times the size of this circular lake. Erosion has removed about a kilometre of rock from the region. The inner plateau remaining in the center of the annular moat is made up of metamorphic and igneous rock types along with melt sheet and is not as susceptible to glacial erosion.