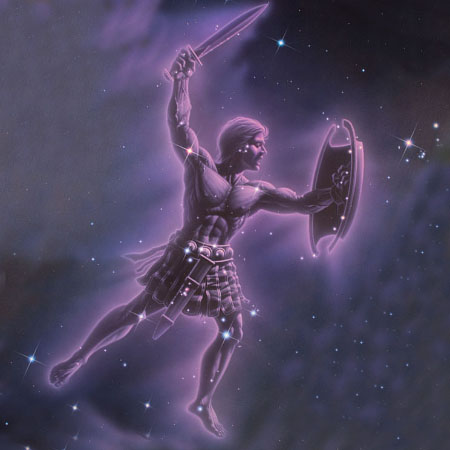 Long, long ago, ZEUS was the king of all the Gods. One day, he was walking on Earth. Deep in a forest he met a beautiful maiden called Callisto. Callisto was so lovely that Zeus came to earth many times to visit her. But his jealous, goddess-wife Hera, soon found out. In anger she turned poor Callisto into a huge shaggy bear.

Callisto was very unhappy because she had a young son called Arcas. Arcas did not recognize the great bear as his mother. Instead, he ran away from her in terror. Zeus was sorry for what had happened, but he dared not speak of it to scornful Hera.

For many years Zeus watched over Callisto, the great bear, and her son Arcas. Then, one day when Arcas was a young man, he met Callisto in the forest. In fear, he raised his spear toward her. It was at that very moment that Zeus appeared and turned Arcas into a bear. Then, with his mighty hand, Zeus took the two bears by their tails and lifted them into the sky. You can still see them when the night sky is clear, as they trudge, with stretched tails around the Pole Star.

To see the Great Bear, look to the stars in the northern sky, after dark. First find the Big Dipper. It forms the tail and hind section of the bear. To find Arcas, the Little Bear, follow the two pointers to the Pole Star. The Pole Star is also called the North Star. It is the brightest star in the in the Little Dipper.

For many centuries, people have studied the stars. Even the earliest man noticed that the stars were arranged in groups. That is when he decided to JOIN-THE-DOTS and create pictures in the sky. The pictures are called CONSTELLATIONS. As the earth turns, the constellations move across the sky. The ancient people believed that the constellations told stories about the Gods (like the story of Callisto). Today we call the old stories “myths” because no one really knows who told them first. Here is a website that shows how the Greeks saw the Great Bear and the Little Bear in the night sky, long, long ago. Then, they joined-the-dots.

Some constellations are brighter than others. That’s why they are easier to see through the city lights. Just find a place where the lights are not in your eyes, for instance, a park, the roof of an apartment building, or even your back yard. On a clear night in May, you should be able to see CASSIOPEIA, the boastful queen. She will appear low in the Northern Sky. You will recognize her as a bright W. Forty-eight constellations are visible from our position on earth. If you find them a few at a time, it will not be long before the night sky becomes a good friend. But remember, as the seasons change and the earth moves, the constellations will appear in different parts of the sky.

You can find books, magazines and sky maps in the library. There are hundreds of photographs of the night sky on the internet (On Google, type APOD). You can even join an astronomy club, like the Royal Astronomical Society of Canada and search the night sky with your friends.