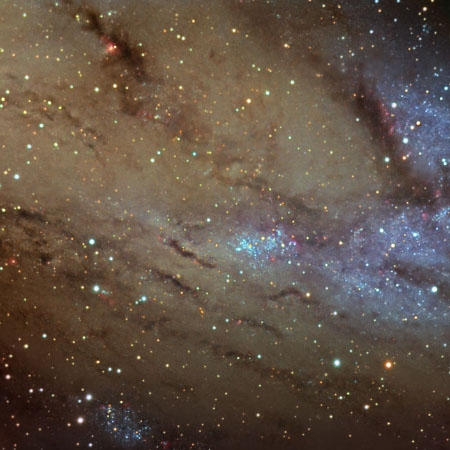 The overall shape of Gould’s belt is roughly elliptical, with the Sun well off-centre. The edge of the belt is ringed by many OB associations regions of ongoing and/or recent star formation. The centre of the belt is dominated by the older, more dispersed Cas-Tau OB association, its proximity resulting in it being spread over a huge extent of sky. Generally, the Gould belt associations farther than the Sun from the galactic centre (above the 90° 270° line) are below the midplane, which is most of them. The rest are above the galactic plane.

Even with our current state of knowledge, dating eons-old events in the Galaxy is fraught with difficulty. To be certain by better than a factor of two is to do well. That said, the history of Gould’s belt as currently envisioned is as follows. Perhaps more so than today, the belt in the past comprised a sheet of discrete clouds of gas mingled with stars. Some 30 million years ago an event triggered a burst of star formation at the position of the Per OB3 association. This could have been the passage of the last spiral density wave through the area, the collision of a high-velocity cloud falling back through the galactic plane, or the latest oscillation of the belt through the galactic midplane. Any such mechanism would have sufficiently compressed the affected molecular clouds comprising the belt to initiate star birth.

Like a spreading rash, stellar winds from the early generation of massive stars, and supernova shocks, compressed nearby clouds to begin yet more star formation. These new stars in turn were the catalyst for succeeding generations, the process continuing even now. The remnant of the earliest generation of stars is visible today as the expanding Cas-Tau association and its core cluster, the Per OB3 group, also known as open cluster Melotte 20. A current pocket of star formation is occurring nearby in the Taurus-Auriga cloud. Around the edge of the belt the more prominent star-forming regions are in Scorpius-Ophiuchus, Orion and Perseus (Per OB2).

After 30 million years this outward expansion of star formation has grown to an area of roughly 600 by 1,000 pc. The primary reason for the belt’s shape is galactic differential rotation. The actual rotation velocity of the Galaxy in the solar neighbourhood is nearly constant with distance from the galactic centre. Even so, objects closer to the galactic centre will complete an orbit in less time than for those farther out. The result is a shearing effect, with outer objects lagging behind. Possibly contributing to this shape is the constraining effect of denser cloud systems in the opposite directions of Perseus and Scorpius. Along this axis the belt seems to be narrower than differential rotation alone would explain.

The tilted arrangement of Gould’s belt supplies us with a tantalizing clue to the dynamics of our galaxy. There is no reason to suppose we live in a unique environment. Similar structures must exist elsewhere, and indeed others have been observed in the nearby Sagittarius arm. Perhaps such ripples or corrugations are common. Because the vertical gravitational potential in the Galaxy’s disk varies rapidly with distance from the midplane, these corrugations must oscillate up and down in a period of many tens of millions of years. Each passage through the denser midplane would likely result in a new rash of star formation.

The Sun’s position in the belt is entirely accidental. The 5-billion-year-old Sun has gone around the Galaxy some 20 times, whereas Gould’s belt has existed for about 1/8th of a galactic rotation. We happen to be just “passing through,” as the Sun’s speed is currently a little faster than the average of the belt stars eventually, we will leave Gould’s belt behind. We are fortunate to find ourselves where we are. Being within the belt allows astronomers to examine clouds and star-forming regions well away from the confusing milky way background. But more than this for amateur astronomers, we get to enjoy the sight of some interesting galactic structure.

Some of you reading this will have seen NGC 206, a young star-forming region in the Andromeda Galaxy obvious enough to get its own entry in the NGC catalogue. By chance we ourselves happen to reside nearly in the middle of a similar structure in the Milky Way Galaxy. This local association is the largest collection of stars sharing a common dynamical origin that we can readily and easily observe. And being within it makes it, after the milky way, the largest deep sky object. Even its sub-structures, the OB associations, are often over 10° across.

The gas clouds from which stars form are mostly confined to a rather thin layer in the midplane of the galactic disk. As a result, the bright, massive, blue stars, which we know are young, are found almost exclusively along the milky way band. Indeed, the more distant such stars very closely trace out the galactic equator. Their more evolved brethren, the red supergiants, also share this distribution.

In the mid 1800s several astronomers noticed that many of the bright stars along the milky way trace a path that is tilted about 20° to the milky way itself. Thirty years later Benjamin Gould conducted a detailed investigation and determined values for the inclination and direction of the poles of this apparent subsystem of stars, thereafter to become known as Gould’s belt.

In a now-classic 1974 paper, Richard Stothers and Jay Frogel [“The Local Complex of O and B Stars. I. Distribution of Stars and Interstellar Dust,” R. Stothers and J. A. Frogel (1974), Astron. J., 79, 456.* WebEd.] mapped out the spatial extent of the belt. Using newly determined distances for B5 and hotter stars, they found two highly flattened stellar systems inclined by 19° 22° to each other the underlying galactic field and Gould’s belt. Figure 1 below shows an edge-on view from within the galactic mid-plane. The dots represent stars of spectral type B5 and earlier (hotter). The Sun is at the intersection of the X and Z axes, and the galactic centre is well out of the view to the right, 8,500 parsecs (pc) distant. The intersection of these planes coincides almost exactly with the position of the Sun. Actually, the Sun is about 20 pc above the galactic plane, but is, within the errors, precisely in the plane of Gould’s belt. The stellar density decreases with distance from the Sun because stars at greater distances are less completely sampled.